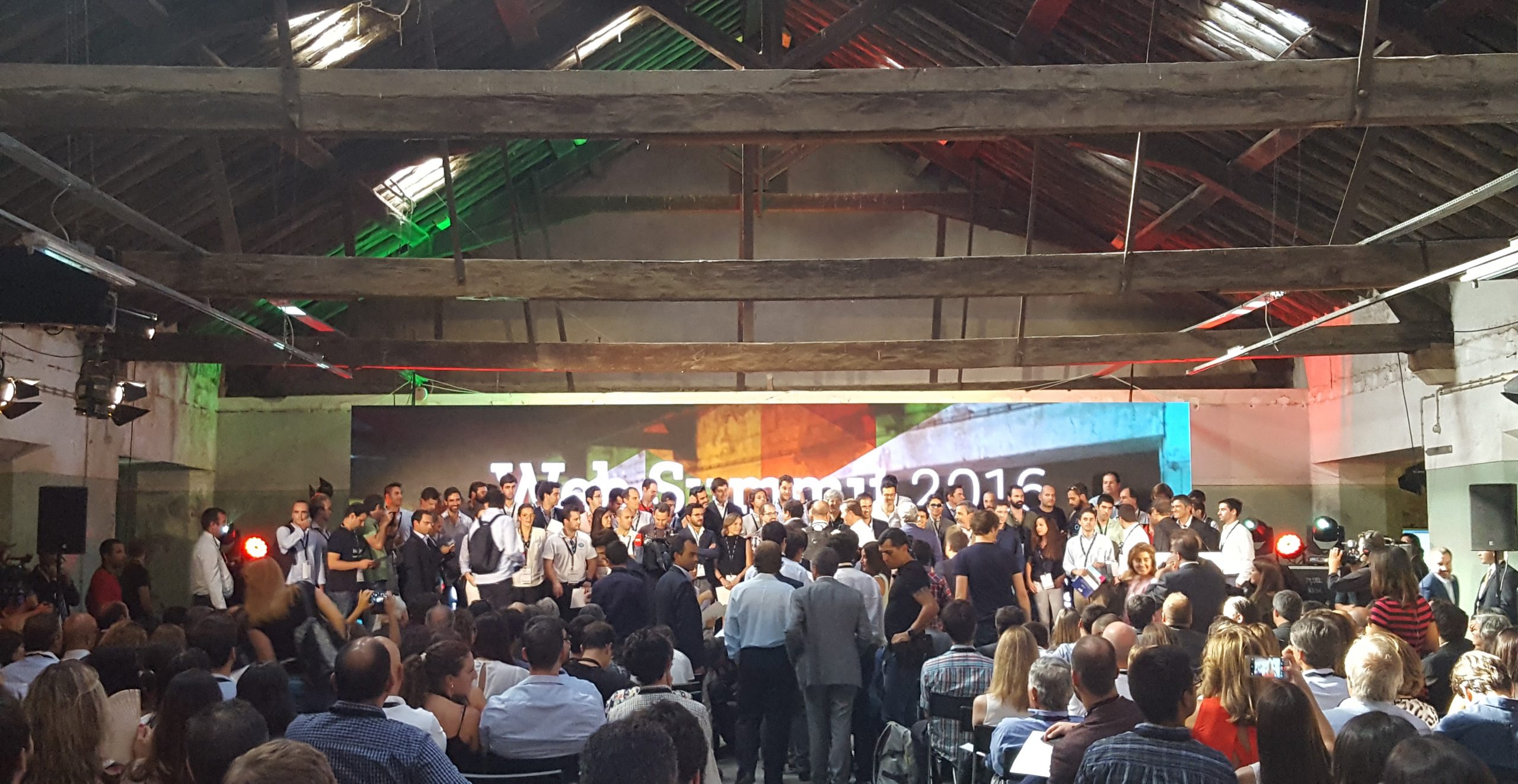 On November 7th to 10th, Lisbon will held the 2016’s edition of Web Summit, known as “Europe’s Largest Technology Marketplace”. More than 50.000 people will gather to talk about tech and its many applications on our daily lives, and to discuss the latest trends in many tech related areas such as Marketing, Fashion, Design, Code, Content, Data, amongst others.

This is a global event that will gather tech CEO’s, founders, marketeers, startups, investors, students, but also political leaders from several countries, to discuss the latest trends in tech and web worldwide.

But this year in FIL (Feira Internacional de Lisboa) and MEO ARENA, in Parque das Nações, Lisbon, the numbers will be the biggest ones yet: 600 keynote speakers, 2000+ journalists, 15.000 startups and more than 50.000 attendees from 150+ countries, including tech CEO’s, founders, startups, investors, students and also political leaders from all around the world.

Since Web Summit was growing faster than expected, Paddy Cosgrave, CEO and co-founder, and his team decided to move to Lisbon, justifying their decision by saying that the event had outgrown its hometown and needed a new city to continue growing. “Dublin is where our headquarters is based with 150 people working in our office there. In the end the event outgrew Dublin. That is not to say we won’t host other events in Dublin in the future”, said Eleanor McGrath, Head of Media of Web Summit, to CMS Wire, leaving the door open for what’s to come.

Another reason to move to Lisbon was the startup community, which has done an outstanding job showing their power e proactivity when in September 2015 a movement was brought to light so people could tell Web Summit’s organization why this event should move to Lisbon.

The “Bring Web Summit 2016 to Lisbon” movement was created by Ship, an online magazine about Entrepreneurship, reaching more than 5000 people on its Facebook Group and giving countless reasons on Twitter why Lisbon should surpass Amsterdam on the final run, with the #LXWebSummit16.

Of course there were some people unhappy with this move, specially Enda Kenny, Ireland’s Prime Minister, who said on the day of the announcement, speaking at the National Ploughing Championship, he was “very disappointed” by this decision. But we can see in every social media that there is many excitement from attendees to get to know a new city and new venues, and also to understand why the Entrepreneurial Ecosystem in Lisbon was the first to receive the European Entrepreneurial Region Award in 2015.

The 2016’s edition is sponsored by several portuguese companies, such as PT, EDP, Caixa Capital and TAP Air Portugal, but also by international companies like Cisco and Salesforce. Google, Microsoft, Apple and IBM will also attend.

This event has been divided into 20 subjects, from Marketing to Society, and will have keynote speakers such as the Prime-Minister of Portugal, António Costa, the President of the UN General Assembly, Peter Thomson, the Director-General of the World Trade Organization, Roberto Azevêdo, the Executive Chairman of Cisco Systems, John Chambers, and many others.

There will also be two new summits that are creating great expectations: Night Summit, so people can discover Lisbon’s night life together, and also Surf Summit at Ericeira, a small town 35 km away from Lisbon, to give surfers the chance to experience the portuguese waves.

On the Road2WebSummit event, that took place in Hub Criativo do Beato, Lisbon, on September 21st 2016, Paddy Cosgrave said that each person attending Web Summit has its own agenda and will be looking for different things to take out of this experience. He pointed out that some people want to do networking with people from other countries and realities, others are looking for an opportunity to show their talent, and many companies and startups will be searching for investment.

Road2WebSummit is a competition launched by Startup Portugal, the Portuguese Government measure created to promote entrepreneurship and grow the startup economy. The main goal of this contest is to select 66 portuguese startups to win a free Alpha Pass to Web Summit 2016, bringing this startups closer to accomplish their goals by joining another 15.000 startups that will attend Web Summit on the 4 days of the event.

With this award, startups will have an exhibition stand, 4 tickets to all days of Web Summit for the promoters of the winning startups, access to investors, mentors, workshops and round tables (Pitch Tracks, Investor Office Hours, Mentor Hours, Startup University, Startup Workshops and Startup Roundtables), and also the opportunity to represent Portugal as Best of Portuguese Tech in some of the biggest worldwide entrepreneurship and technological events, such as Cebit, CES, Mobile World Congress, South by Southwest and TechCrunch Disrupt. Seven of the chosen startups will also have access to parallel events of Web Summit that will have global leaders attending, such as prime-ministers and major companies CEOs.

Since this competition was announced, on June 6th 2016, 237 startups applied, but only 170 were selected for the final pitch on September 21st. The Road2WebSummit event had several stages where the final pitches occurred, spread inside 2 buildings of Hub Criativo do Beato, an old bread factory with warehouses that was disabled many years ago and will now be remodeled by the City Hall of Lisbon in order to receive startups and innovative companies.

Before the announcement of the 66 winners, Paddy Cosgrave told everybody in the audience, a few hundred people, that Web Summit will be opening a new office in Lisbon which will be located at Hub Criativo do Beato. You can check all 66 startups attending to Web Summit here.